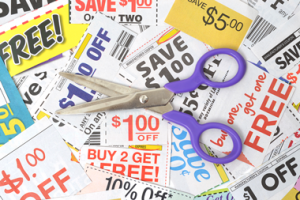 While the total number of print coupon users has decreased slightly since 2012, it still trumps the 68.4 million coupon users who currently use digital coupons. Incredibly, when accounting for all coupon usage, there are no significant differences in use across multiple demographics—including generations or income levels.[1]

One might assume that of all generations, Millennials would be the least likely to use print coupons (versus Gen X or Boomers). However 82% of Millennials use newspaper-delivered coupons, which is in line with the 83% of Gen X and 79% of Boomers who are also using them.

Additionally, 34% of Millennials say their mail coupon usage has increased.

“33% of affluent consumers (vs. 30% of all consumers) are influenced by a coupon to shop a store they don’t typically frequent,” according to Experian Marketing Services research.[2] This coupon usage includes print, mobile phone, and store loyalty card redemption methods.

Overall, both print and digital coupons are widely used by consumers. However, over 90% of all coupons distributed are through the Free-Standing Insert (FSI), which includes all types of coupons and/or vouchers advertised on newspaper or magazine inserts, while less than 1% is digitally distributed. More importantly, about 50% of all redeemed coupons are FSI while only 12% are digital.[3]

The 2K16 Valassis Coupon Intelligence Report shows that an integrated media approach, one that balances the use of print, digital, and loyalty card coupons in a marketing plan, is the best way to reach the most consumers, as 71% of consumers “use any of these media to save money”. [1]