How Political Direct Mail Will Help Your Candidate Win 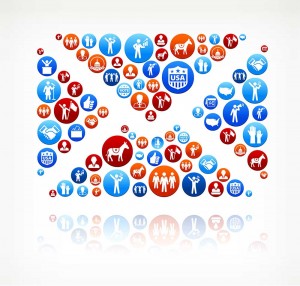 You should never underestimate the power of direct mail, but especially not during election season. Pushing political campaigns through the mail has remained a tried and true way to reach voters and solicit them to vote for your candidate.

Did you know that direct mail is considered the most credible form of political outreach (more than TV, home visits from campaign staff, radio ads, digital ads, and telephone calls). Political mail also helps surveyed voters decide how to vote (including 55% of all Millennials surveyed).

Fills the gap left by new media. People are quick to say that digital media has snuffed out the relevance of print advertising, yet when it comes to election season new media leaves plenty of room for opportunity. While your target audience is likely being barraged by display ads, bombarded by emails and constantly encountering television ads, you can reach them by less intrusive means: the mail. According to The Household Diary Study: Mail Use & Attitudes report conducted by NuStats in 2012, 79% of recipients either read or scan the advertising mail they receive daily—which is significantly higher than most industry average email open rates. Not only does print mail allow your audience to interact with your candidate on their own terms, you can also contact them through a less utilized channel, which will only make your candidate stand out more.

Cost effectiveness. Political direct mail is one of the most cost-effective ways to reach your voting audience. Many digital advertising channels can be extremely expensive and only become more costly as Election Day gets closer. A USPS political mail resource stated that one candidate won 79% of the election districts that were targeted with Every Door Direct Mail and he only spent $2.40 per voter, compared to his opponent, who spent approximately $90 per voter. Whether it’s sending a postcard to an entire district or sending donation envelopes to a targeted audience, direct mail allows you to reach many people in a way that is effective and affordable.

Target your exact audience. Direct mail gives you the ability to determine the exact audience that sees your advertising based on factors such as age, gender, socioeconomic status, and political affiliation. This segmentation ensures that your message is not being wasted on the wrong people and that your overall marketing budget is being spent as wisely as possible.

Opportunity to be creative. Much of today’s advertising is limited to a screen, and thus limited in creativity. However, the limitations of digital do not apply to print advertising. There are countless ways to be creative, whether it’s incorporating an Augmented Reality (AR) component to your mail piece, encouraging a digital connection with a PURL (personalized URL) or social media links, or including a bumper sticker as part of a multi-piece package, the ways in which you can interact with your audience are much broader and stand to create a more lasting impact.

Other Key Points About Political Mail:

For more information about political direct mail, check out this PDF from USPS: https://www.usps.com/political-mail/overview-direct-mail-political-mailing.pdf